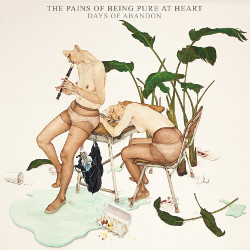 American indie pop outfit The Pains Of Being Pure At Heart release their new album Days Of Abandon on the 2nd June. Following on from critically acclaimed albums in 2009’s self titled debut and the 2011 follow up Belong, the album is highly anticipated in several circles. Many critics see Days Of Abandon as TPOBPAH’s chance to kick on and solidify their reputation as one of America’s best guitar bands.

That sentiment was echoed by the band. “Days of Abandon was a chance to push beyond Belong’s universal style of songwriting into something that was far more personal and true to my ideals”, says the band’s Kip Berman. ”I wanted the music to be joyful, lush and full of possibility, even if the subjects were often more painful to confront.”

I suppose if TPOBPAH’s previous efforts have taught us anything it’s to expect a big shift from album to album and Days Of Abandon falls into that sequence. We’ve already seen a move from dream pop to fuzzed up indie anthems, here you get a more conventional guitar pop sound with an assured swagger and maturity to the songs. Brace yourself for the difference from Belong.

‘Art Smock’ gets the album off to a laid back start, it meanders through some acoustic guitars and delicate vocals and it’s in stark contrast to the instantaneous punch of Belong. That mellow start doesn’t last for too long though, ‘Simple and Sure’ bursts into live blossoming into a superb pop song crammed with hooks and an insanely catchy chorus. ‘Kelly’ is a glorious pop song, sounding almost Saint Etienne like in its execution.

The difference in quality is plainly obvious, TPOBPAH have answered their critics with aplomb, producing a wonderfully mature and optimistic sounding album. ‘Beautiful You’ is a joy whilst ‘Colour and Gold’ is gentle with a frail magic before building up and exploding into an uplifting pop song, albeit with some pretty dark lyrics. ‘Eurydice’ is a volatile chunk of guitar pop, once again the sombre lyrics talking loosing somebody come across life assuring amongst the jangly guitars. ‘Masokissed’ sounds akin to The Smiths and their darkest yet poppiest best, it works fantastically. Penultimate track ‘Life After Life’ is a standout track, catchy and full of sumptuous hooks it again lifts those dark lyrics and places them against an optimistic musical backdrop.

Days Of Abandon is a superb album. Dark yet positive, confident and life assuring. This is how pop music should be made.

1 Comment on Album Review: Belong by The Pains Of Being Pure At Heart