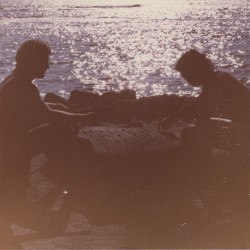 Californian band Seahaven released their new album Reverie Lagoon: Music For Escapism Only earlier in the year and it’s quite the turn up for the books. While their previous long player saw them in a punk and riff attack mode, Reverie Lagoon takes a completely different spin, coming across mature and assured. Seahaven have managed to cast of that cloak of modern punk and found a distinct sound they can call their own.

There’s more indie sensibilities this time, for the most part the pop hooks have been replaced by a brooding energy. It sounds far more expansive and the mood is distinctly warmer and less angst ridden. The band’s transformation is akin to the move of Brand New from brash pop punk to a denser and more complex indie rock sound.

Reverie Lagoon is quite the formidable album, racking up 14 tracks and clocking in at just over 56 minutes it’s one of the longer albums to catch Alt Dialogue’s attention this year. ‘Andreas’ gets the album off to a rousing start, the bass grooves along with the vocals providing a superb pop melody. The guitar work is intricate and there’s a lovely build up at the 2 minute mark before the track explodes into a great alt rock track.

Current single ‘Silhouette (Latin Skin)’ is a wonderful laid back track. The addition of strings to Seahaven’s sound makes for a dreamy and reflective sound. ‘Silhouette’ builds up to terrific chorus – that hook will be with you for the rest of the day. ‘On The Floor’ is contemplative track; the simple guitar riff complements the fragile vocal perfectly. The rhythm section is absent for the first half, the minimalism of the track makes it haunting and you can feel the raw emotion. When the rhythm section makes its appearance it is subtle and adds a delicate layer to the track.

‘Flesh’ is a rare moment of the Seahaven of old. There killer riffs are back, the fragile and breezy vocal is replaced by that old angst ridden snarl. The track is jam packed with glorious pop hooks; whilst it may sound a little out of place ‘Flesh’ acts as reminder of how the band can bridge the gap between pop punk and the expansive indie rock.

‘Love To Burn’ reverts to the general feel of the album, the driving bass introduction is excellent while the intricate guitar adds a relaxed dream pop feel to the track. At times the vocal treads dangerously close to something almost Bono-esque. ‘Solar Eclipse’ is a piano led number which showcases the strength of Kyle Soto’s vocal. ‘Karma Consequential’ is a fantastic dream pop number once again highlighting how Seahaven have developed into a band with the knack for writing an assured and grand alt pop sound.

‘Reverie Lagoon: Music For Escapism Only’ could easily be considered too much of a step away from the Seahaven of old, but when a band grows into a sound which encapsulates a Southern Californian alt pop feel perfectly you can only lavish it with praise.